It was way fun to spend time with an almost 2 year old granddaughter for 3 days. She is strong, smart, creative, focused and knows what she wants. The 2 year old drama is there too of course.

We had extra time with her because her daycare was closed Friday because of the fires. We spent the time singing silly songs, marching around and much more. All the time we were there was spent indoors because the wildfires in N Cal made the air quality awful.

The birthday party was a success although she was mostly focused on playing as usual and not that interested in the decorations LOL. Many more paper airplanes were made than were hung although Hubby and Auntie made mobiles of them to hang outside too in place of balloons. It was really cute! There was even a toy plane cake topper. 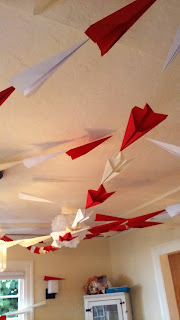 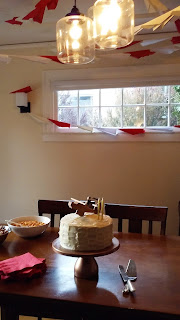 Our drive home included lots of discussion about if we will move again to be close to her now that my FIL has died and, if so, how we will make a decision about location and timing. We are still tired from the last move but will probably eventually make this one. Lots to consider.
Posted by Juhli at 9:37 AM