Last week we headed to LA for a mini-vacation and family visit time. We started out by staying one night at a hotel downtown so that we could explore on foot some of the changes that have occurred in the 15 years since we moved away. Straight from the airport to an Italian Deli that has operated since 1929. We had lunch with friends from grad school 35 years ago. Then downtown for a self-guided walk of the historic buildings in the "old downtown" section. We rode the renovated Angel's Flight funicular, saw great architecture from the 1890s to 1930s and went through the bustling Grand Central Market and by other stores nearby including this Quinceanera dress shop. Sorry for the blurry photo; just think of it looking like the girls are all dancing! 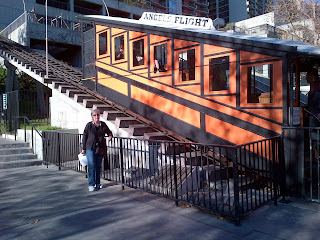 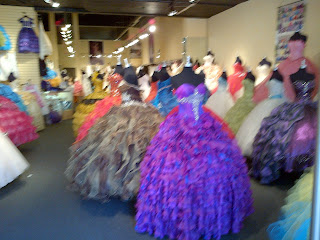 The next morning we hiked down to the Staples Center to see the part of town that now is full of lofts, condos and apartments as well as restaurants and other shops. It was great to see so many people out walking their dogs early on a Saturday morning in a part of town that used to be pretty deserted.

Then we hiked up Bunker Hill to the Disney Concert Hall for another self-guided tour this time with my older son's girlfriend. He was sick and I didn't get to see him this visit as he didn't want to infect us (happened anyway!). I highly recommend touring the Disney Concert Hall. The architecture is fabulous and it reminded us all of Gaudi's works in Barcelona with a modern twist. 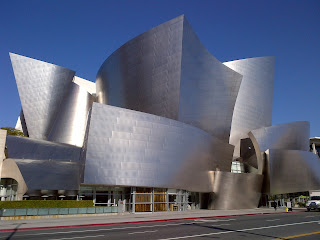 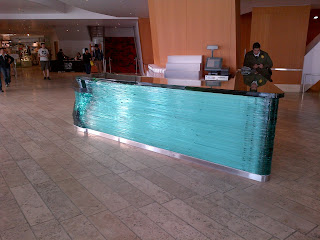 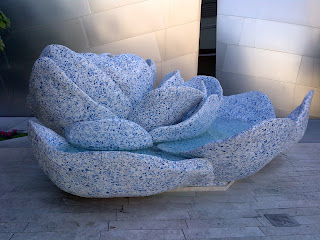 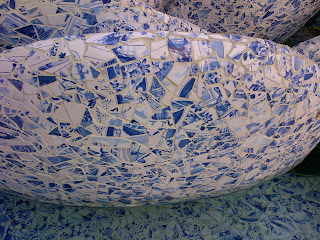 Then we headed over to Phillipe's for French Dip sandwiches with our younger son, his fiancee and the older son's girlfriend. This is a classic old restaurant with sawdust on the floor near Union Station and Olivera Street which is the oldest part of Los Angeles where the original Pueblo was located - both of which we walked around.

Then it was a break for coffee, heading out to buy wine to take to my husband's uncle's 90th birthday party, a stop at a wine bar to use up some time and then the big party. We spent the rest of the weekend at my FIL's with side trips to our younger son's place and a nice lunch and walk at the beach in Ventura.

Lucky for me I didn't start feeling sick until the morning of the day we flew home. I see from the newspaper this morning that there are 3 viral epidemics in the country right now and I seem to have contracted the least bad one with no impact on our vacation. It was disappointing to not see my older son but kind of him to be worried about spreading the virus.