December is full of commitments for many of us isn't it? Hopefully yours had some lovely entertainment and time with loved ones too.

Week 1: We tried to go out for dinner Saturday night, but ended up just having drinks as we waited 1 1/2 hours after ordering , but no food arrived at our table!

Monday was a busy day starting with exercise at home, than a "who knows why" vomiting dog who had to see the vet twice (fine now), laundry, a Pet Club board meeting with the new club President too ill to come so I am still in charge (sigh), and a call from our son where I learned the deer tree ornament sent to our 2 year old granddaughter was a big hit (yeah!).

Went to a women's club board meeting to report on progress on a project and got elected to the board which was a big surprise and I'm not sure what it means commitment wise, but I do like these women! The next day enjoyed another interesting discussion about book with the book subgroup of my women's club followed by lunch (shrimp enchilada and salad - yum!)

Week 2: Made 4 dozen cookies for the Pet Club Holiday Dinner dessert potluck. They are White Chip Cranberry Blondies and boy are they sweet! We (the club leadership) managed to pull off a successful party despite ill health on several people's part. Whew. 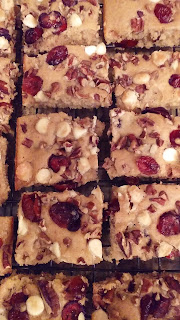 And then there was my women's club holiday meeting and potluck lunch for 37 people. I made Balsamic Honey Carrots using a recipe from Budget Bytes and they were such a hit that I was asked for the recipe. That has happened before like - never. The trick I think is roasting the carrots instead of steaming or boiling them. Then we had a middle school jazz pop band play for us which brought back lots of memories of sitting through many, many concerts of my musician son. I wore the apron made by my new DIL's mother for each of the women in the wedding party out of extra fabric from the tablecloths. The sunflowers match the club's logo and I was helping with lunch. 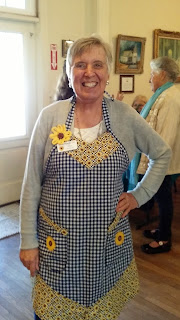 We ended the week by having salmon tacos for lunch on the Ventura pier while watching the waves roll in.

Week 3: We are exchanging "stocking type" gifts with our local son and DIL. I packed each of them a gift bag of food, fun and emergency kit items. The dog is "getting" a small Christmas tin filled with poop bags. I'm sure he'll be thrilled LOL.

Hubby's 90 year old aunt called to remind us that she will be going to Idaho for 2 weeks to visit her son and his family. I want to be her when I grow up! Her husband died this year so she took the challenge of traveling by herself having never gone through airport security or taken Uber. She uses GoGoGranny to schedule her ride. What a strong woman.

And our beloved pier in Ventura was damaged by 15 foot high surf (Photo) and closed until repairs can be done. This historic pier has been damaged by waves or burned many times including having 20 feet of pier ripped off once. It keeps getting repaired although there is no date set for it to reopen yet. Lifeguards also had to use water craft to rescue surfers who couldn't resist trying to ride the waves.

Week 4: A lovely Christmas Eve at our son and DIL's followed by a sick Hubby on Christmas morning so we came home right after a quick opening of gifts and before their brunch party started.  It was fun to meet the Mom of one of their friends from S. America. My son met him when they both lived in Japan for a while. They have such a nice group of friends and throw really fun parties. 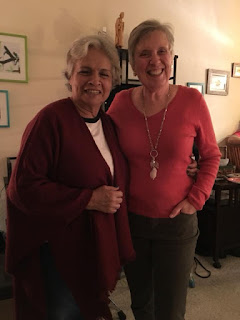 And then there was the unexpected. For the first time in 53 years of driving I was on the freeway and my car simply lost all power and with that the ability to drive. I was able to get over into the breakdown lane fortunately but was between a high wall and the end of an on ramp. AAA showed up very quickly and got me and the car off the freeway safely, the car needed a new fuel pump and 7 hours after I left home I was ready to drive back with only a repair expense. I admit I was initially terrified, but now I am only feeling grateful.

BTW, the tow truck driver said if your car stops in a traffic lane and you can safely remove yourself and get off the freeway that is the best thing to do as your car is definitely in danger of being hit! I stayed with my seat belt fastened so in case I was hit the air bags could help me and I wouldn't be thrown out of or around the car. He confirmed that was the best choice in my situation.

Last 2 Days: Getting ready for a short visit by son, DIL and granddaughter so cleaning and grocery shopping. Spent the early part of the 31st with both sons and their families before bringing the dog and ourselves home for a very quiet New Year's Eve. Hope your year was fabulous!
Posted by Juhli at 7:14 AM

Email ThisBlogThis!Share to TwitterShare to FacebookShare to Pinterest
Labels: sentence a day