Part 2 of our excellant NYC adventure

We slept really well after walking all over the place on our first full day in NYC and congratulated ourselves on navigating the subway fairly well. This day we planned to head a different direction and started off to the subway. That ate up a bit of time until we figured out an alternate route since the train we wanted wasn't running LOL. Again, these aren't my photos but rather ones from the internet.

We made it to the 9/11 Memorial which my husband really wanted to visit and I really didn't as it made me too sad. I sort of walked around while he saw what he wanted and then we headed off to points of mutual interest.

Next stop was the Alexander Hamilton Custom House which is again an architectural gem and has a wonderful ceiling mural (seems to be the trip theme by default!). We only saw the first floor which is where the National Museum of the American Indian is housed. A fabulous exhibit of modern silver and turquoise jewelry by members of the Yazzie family and way out of my price range but truly works of art. 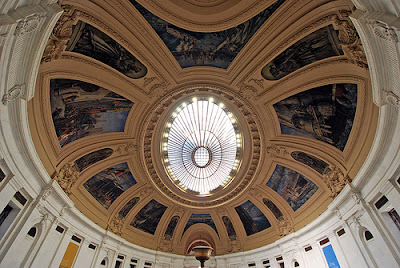 After lunch nearby we took the Staten Island ferry for the best free harbor tour and Statue of Liberty view available. I was intrigued by buildings on Governor's Island and the other forts in the area. I have since learned that this is Castle (Fort) Williams built in 1807. It was in active use during the Civil War and then converted to a prison in the early 1900's. I'd like to go back in the summer when the island is open and tour the island. 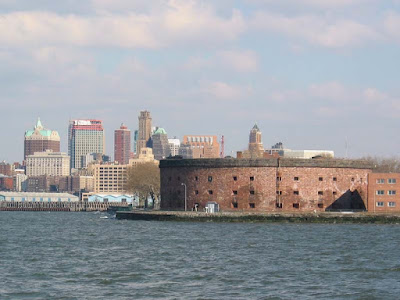 We did walk a little on Staten Island and went to a small museum there that had the history of the ferry boats on display. Then road back and hiked up to the American Museum of Currency (again Hubby's list) only to find it closed for a special event. Oh well, fortified by coffee we hit the subway and went back to Greenwich Village for a terrific Italian dinner in a cozy basement restaurant just down the street from our hotel.

For our last half day we started with a walk on the Highline in Chelsea/the Meat Packing District for great views of the Hudson River and the city skyline. Our love of architecture was again satisfied in enjoying the ways the rail lines were incorporated into the walkway and planting areas. 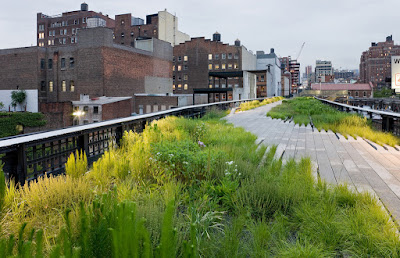 We also walked through Chelsea Market in repurposed warehouses and could have spent more time there browsing but the outdoors was just too lovely.

Instead we bought salads for a picnic lunch and sandwiches for the plane and took them back to Washington Square Park. We watched the filming of a scene for a move or TV show, an artist painting a large canvas, hear a classical violinist and listened French students on tour singing for fun while we ate lunch and rested our weary legs and feet.

That is our little fall vacation to NYC. Hope you enjoyed the tour.
Posted by Juhli at 5:00 AM

Email ThisBlogThis!Share to TwitterShare to FacebookShare to Pinterest
Labels: travel