My Dad, like most men of his generation, signed up for war during WWII. He wanted to be a pilot in the Army Air Force but trained as a bomber flight engineer instead. He was ready to head to college but instead headed to war. He thought he would die as had almost all bomber crews to that point and left goodbye letters for his family to open upon his death. Here he is in his official service portrait. 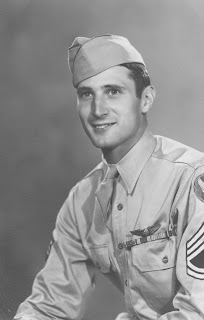 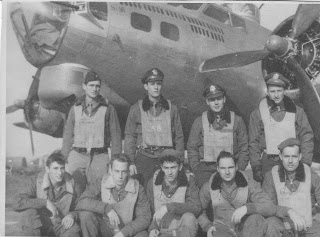 He is the man on the bottom left in this photo of his flight crew. He hated his boring assignment to Alaska and volunteered to go to the European Theater. He lived through his missions flying out of an airfield in England to drop bombs over Germany and other parts of Europe. He saw many others die as their planes exploded and was actually hit in the head by a piece of shrapnel during one flight. Fortunately he had his helmet on that day - and every day after although not every day before. His older brother flew on cargo planes that supplied troops in the Far East and also survived despite harrowing flights over the "Hump" and other dangerous areas.

He was grateful for and delighted with every day of his life afterwards. I'm very lucky he was my Dad as he was a wonderful, kind man with a zest for life. He finally got to fly when he became a sailplane (glider) pilot and co-owned a sailplane with a neighbor. That brought him great joy although none of the rest of us really liked our one time experiences in the plane lol. He died in 2009 at the age of 88 and I miss him a lot.

Email ThisBlogThis!Share to TwitterShare to FacebookShare to Pinterest
Labels: family