A brief history of, and much thanks for, air contitioning 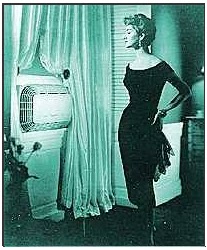 The first attempt at air conditioning was in the 1830's when a physician created a machine to blow cooling air in the hospital rooms of patients suffering from malaria and yellow fever.  However, the first air conditioner similar to modern units was mad in 1902 and in 1914 one was actually installed in a private home.  Most early air conditioners went in industrial buildings.  Window air conditioners appeared after WWII with sales of 1,045,000 units by 1953.(Don't you love that picture!)

However, I grew up in central Illinois without air conditioning.  First we had one fan and later an attic fan.  I remember falling asleep with the windows open and my hair, body and sheets drenched in sweat.  I moved to the northwest and didn't need it there, so the first time I had the luxury of air conditioning in my home was in the mid 1970s in a rental apartment in the central valley of CA.

Now in Atlanta I give thanks many days of the year to the invention and availability of air conditioning!  I have really felt sorry for those in the Atlanta states and parts of the mid-west who have been without electricity and thus air conditioning during this horrible heat wave.  It is one of the inventions that has really made modern life more comfortable and I am very grateful for that.
Posted by Juhli at 7:46 PM