Take action is my fourth Happiness Commandment.  It might seem like an odd one to include but I tend to over think things so acting instead of mulling it over can contribute to my happiness.  There is also the well researched relationship between action and feelings.  Your feelings - and thoughts/attitudes - follow how you behave.  So if I do something that is positive, then I will feel more positive.  Also, to take action I have to make a decision which reduces stress. 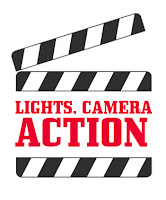 April is a month of taking action.

So far I've worked on the yard for two mornings and set up an appointment with the landscaper we have used in the past to get a price on addressing some of the workload in the yard by changing plantings to easier care.

I've also started working on (again) getting rid of the green stain on some of the bathroom floor grout instead of being frustrated that it came with the house.  I don't want to pay to re-grout the floor so I'm repeatedly treating it with OxiClean and it is fading.  We'll see - I've tried lots of other cleaners.

I've drafted two marketing pieces for my Friends of the Library group and hopefully they will be liked by everyone and we can move forward on that.

I'm in the midst of a consulting project so I'm conducting interviews by phone with people around the world and will soon write the reports.

I bought a short sleeve, lightweight black summer cardigan and the same thing in an orange sherbert color.  One is very practical - the other goes with fewer things but is more of a fun color  I'd usually talk myself out of this, but my new mantra is that its called HotLanta for a reason!  5 months of sweltering last year - I need to have a larger warm weather wardrobe to be comfortable.

I scheduled a coffee date with a friend I rarely see outside of book club.  I also bought tickets to a performance of The Night of the Iguana which features another friend - this will be part of our anniversary weekend.

Since it is only April 4th I think I'm doing well on taking action!
Posted by Juhli at 6:00 AM