What would you grieve for if this happened to you? 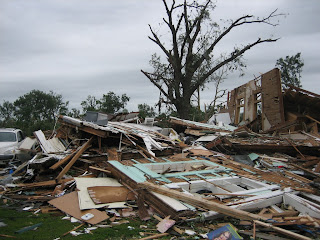 Every year some unlucky people end up being the ones in the path of the tornado that touches ground.  This week quite a number lost their lives and many more lost their homes and a lot or all of their belongings.

Last night we watched as tornado warnings interrupted our tv show and I thought about the devastation people were facing. Fortunately we only had loud downpours as we were a bit south of the worst of the storm front.  I was wondering though if we would even have time to corral the dog if we had to make a run for the basement.  Then I began wondering what I would actually miss if our house was destroyed and we all survived and were safe.  My conclusion was that I wouldn't really miss any of our stuff.  I would hate having to replace what we needed as dear friends of mine did after their home was made uninhabitable by the Northridge earthquake years ago.  Although they were able to salvage some things they still pretty much had to start over.

With all of the emphasis and time spent on acquiring stuff, caring for stuff, organizing stuff, and then decluttering stuff, for me in the end all that would matter is that my loved ones were safe.  Something to think about as our hearts go out to those who lost loved ones as well as their homes.
Posted by Juhli at 6:46 AM