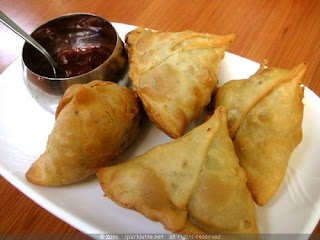 One of my 2012 goals is to try 4 new restaurants.  Friday evening we went to the first - a close by locally owned restaurant that serves Malaysian and Thai food.  My hubby had eaten lunch there once and liked it although he had Thai food that time.

We had potato samosas as an appetizer and they were very good as was the sauce.  We both ordered Malaysian entrees.  Mine was called Salmon Lava - don't you love the name?  It had lots of veggies in it as well as a large piece of salmon.  I enjoyed the fish and veggies - even the okra which is not usually a veggie of choice.  However, we both found the sauces on our dishes too heavy and oily.  No return visit is planned but it was great to try something new.

What new thing have you tried recently?
Posted by Juhli at 10:18 AM